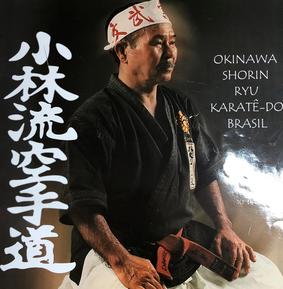 Gone but not forgotten

YOSHIHIDE SHINZATO AMBASSADOR TO THE WORLD

Karate enjoys a prominent place and a long tradition in Brazilian martial arts. Karate was brought to Brazil by Okinawan and Japanese masters, who were among the large numbers of emigrants to Brazil during the last century. Okinawan karate master Yoshihide Shinzato was the best known of these masters. He also was well known and highly respected on an international level. The international karate community mourns the loss of Master Shinzato, who passed away on January 13, 2008, at the age of 80.

Headquartered in Santos, Brazil, the port city of Sao Paulo, Master Shinzato had hundreds of affiliated karate schools in Brazil, Argentina, and throughout the rest of the world. With a warm, caring and humble style, and a bright smile always on his face, Master Shinzato taught and touched the lives of tens of thousands of students in his nearly 70-year martial arts journey. His students came from all backgrounds, including members of police and military forces.

In 1954, at age 27, Master Shinzato left Okinawa for Brazil to fulfill his dream of becoming an ambassador of karate to the rest of the world – a dream he fulfilled well beyond anyone’s expectations. Lacking the financial resources to open a karate school upon his arrival in Brazil, Master Shinzato worked in farming and drove a truck to transport agricultural products to markets while teaching karate from his home. In 1962, he opened his first karate school in Santos; from there, his incredible network grew and flourished.

Master Shinzato truly was an ambassador of karate. He welcomed with open arms, students and practitioners from every part of the globe (including the writer of this article, who became his student in 1970 while living in Brazil as a foreign exchange student from the United States). The awards, honors, and titles bestowed upon Master Shinzato during his lifetime are far too numerous to mention in one article. They were never sought by him, but were ways his students and community could say, “Thank you for what your life and work has meant to us.”

Master Shinzato’s martial arts lineage was exceeded by no other. Masters with whom he trained include Anbun Tokuda and Choshin Chibana (both disciples of Anko Itosu, who was a disciple of Sokon Matsumura), Shikan Akamine, Masahiro Nakamoto, Katsuya Miyahira, and Katsuyoshi Kanei. His lifelong dedication to martial arts, and the lineage from which he came, resulted in many rankings. These rankings include: Shorin-Ryu Karate (Kobayashi) 10th Dan Hanshi, Kobudo Hanshi, and Goju-Ryu Karate 5th Dan. He also trained in other arts, including Judo under Soko Itokazu.

The entire karate world, including Master Shinzato’s wife, Tomi, his eight children and fifteen grandchildren, has lost a wonderful man and a great ambassador. With the enormous number of lives he touched, and the positive impact he made on the world, his legend will live forever. 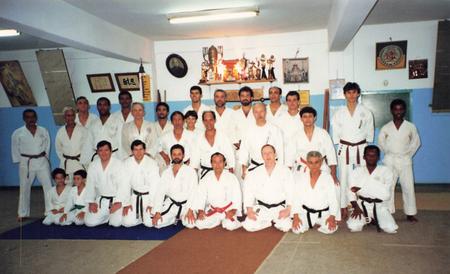 When one talks about Okinawa Kenpo Karate-Kobudo the name Hanshi Seikichi Odo usually comes up first. Known internationally as the “World Walker”, he has touched and influenced thousands of martial artists all over the world during his lifetime. Even now hundreds of martial arts instructors teach his katas and weapons and share his stories. I personally met him in 1982 and joined his organization in 1983 as a student of Hanshi Richard Gonzalez. I have stayed dedicated to Odo Sensei and the Okinawa Kenpo System ever since I walked into Gonzalez Sensei’s dojo. Hanshi Gonzalez was teaching at the Catlin Halsey Community Center (Navy Housing Area) located on Nimitz Highway in Honolulu Hawaii. It later became my Hombu dojo.

It was around 1998 that Hanshi Odo changed the name of his system to Ryu Kyu Hon Kenpo Kobujyutsu since “Okinawa Kenpo” was associated with many different factions and organizations. The truth is the style he taught is still Okinawa Kenpo Karate. There are a few very dedicated martial artists out there that use the name “Okinawa Kenpo” but still teach Odo Ha (Odo Sensei’s version). Masters such as Richard Gonzalez, Bruce and Anne Marie Heilman, Larry Issac, John Jeffery, Victor Ortino and I still use Okinawa Kenpo in their dojo name.

It was shortly after the passing of Daisensei Seikichi Odo, that the Ryu Kyu Hon Kenpo Kobujyutsu Association (RHKKA) was formed. Masters Ed Hershman Jr. (President 2020), Rick Van Meter and David Fivecoat, were some of the original members. It has now grown to about 20 active members which include Hanshi Dean Stephens, Hanshi Al Louis and Hanshi Paul Ortino. The RHKKA has kept Odo Sensei’s legacy alive by opening the organization to those wishing to continue teaching his katas and kobudo.

Odo Sensei began his martial arts training at age 9 in Judo. His first karate training began at age 13 under Master Koho Kuba. Although Master Shigeru Nakamura was his last sensei, he had studied and trained with martial arts legends such as Mitsuo Kakazu (known for his expertise with the Tekko), Kenko Nakaima and Seiko Toma. Seiko Toma taught him both karate and kobudo. Toma was a student of Zenpo Shimabukuro. Shimabukuru Sensei was a student of Chotoku Kyan (1870-1945), who was known for his exceptional use of the Sai. Most of the weapon katas that Odo Sensei taught he learned from Shimpo Matayoshi, the son of Shinko Matayoshi.

Odo Sensei died on March 24th, 2002. He was survived by his wife Yoshiko and sons Susumu and Itsuma. He left no one as his official successor as he wanted us all to continue to grow and train with each other. Many believe he was grooming his son Seijun Odo to be his next in line, but Seijun died before his father did. That left about a dozen or so of his most senior black belts to carry on his teachings. Some of them include such well known masters such as Richard Gonzalez, the late Joseph Bunch, Bruce and Anne Marie Heilman, Ed Hershman, Al Louis, Dean Stephens, John Jeffery, Rick Van Meter, Vic Coffin, Larry Issac, John Snyder, Victor Ortino, Brian Malm, Tim Richardson, Pat McGale, Butch Spain, Ron Robles, Greg Baker, Ron Dargan  and myself. There were others as well and no one was left out intentionally.

So, who were his teachers that influenced him the most? As far as karate goes, Shigeru Nakamura was probably the one who had the greatest influence on him. Nakamura Sensei was born on January 20th, 1894 and died in 1969. His karate training began at Icchu Middle school where both Kanryo Higashionna and Chomo Hanashiro taught. It is said that Itosu Anko and Kentsu Yabo, both martial arts legends, visited that school often. Nakaumura Sensei then went to Nago city where he trained under Shinkichi Kuniyoshi around 1953. He eventually opened his own school where Seikichi Odo became one of his most senior black belts. Shigeru Nakamura was one of the original karateka that started Bogu Kumite which was one of the first full-contact karate training with protective equipment. When Nakamura Sensei opened his own school in Nago he called it “Okinawa Kenpo”. Odo Sensei eventually added kobudo to his school. It was in the 1970’s that the All Okinawa Kenpo Karate-do League was formed with Seikichi Odo, Seijara Maehara, and Kenko Chibana being senior members. The name later got changed to the Okinawa Kenpo Karate Kobudo Federation. It was only a few years before he passed away that it got changed again to the Ryu Kyu Hon Kenpo Kobujyutsu- Federation. There are about 18 empty hand katas and 22 weapon katas that most of Odo Sensei’s senior students teach.

Odo Sensei was a weapons specialist. We are talking of traditional weapons of course. There are 13 bo katas, one Eaku Bo, four Sai katas, two kama katas, two Tekko katas, one Nunte-Bo, two tonfa and one nunchaku kata that are taught in most Okinawa Kenpo Dojos that teach Odo Sensei’s weapons. Shimpo Matayoshi was his main weapons teacher. He was the son of Shinko Mayayoshi. Shinko was born in 1888 in Naha-shi at Senburu. Some of Matayoshi’s teachers include Master Shukuho, Master Irei as well as studying in Manchuria China under some excellent Chinese martial artists.

The Okinawa Kenpo System claims a few other masters who studied under Nakamura Sensei, but Odo Sensei was the only one who fully combined kobudo and karate as part of his regular teachings. Odo Sensei was one of the first karate sensei in Okinawa to teach the US military. A perfect example of this was in Hawaii during the years from 1980 until 2006 virtually every military base had an Okinawa Kenpo Dojo located there. Joseph Bunch, Richard Gonzalez, Richard Myers, Ron Dargan, Brian Degori, John Balacy, Mike (Q man) Quezada, Rodney Kelley, Marcus DeValentino, John Jeffery, Marc Charles , Maryanne Del Rosario, Troy Boris, Larry Moore, Rick and Keiv Dumlao and Brad Andersohn all taught Okinawa Kenpo on the military bases in Hawaii. My entire family including my wife Daisy and children Cheryl, Sherry Anne and Shanelle taught at Hickam AFB, Catlin Halsey Community Center (Navy Housing), Wheeler AFB, Camp Smith, and Schofield Army Base during those years. Sensei Eddie Crisostomo and Sensei Alfred Chock still have a dojo at the Hickam AFB in Hawaii.

Because of Master Odo’s unique connection to all branches of the US military his system has spread throughout the world. The question so many people ask is what was Master Odo really like? He was a gentleman of excellent character. A humble man if I ever knew one. He would never insult anyone and if you made a mistake you would know it by his facial expression. If you did a technique, he liked he would say,” Can do “and if he did not like it and you asked him then he might say” No can do”. Now if he liked you then he would walk over to you and say,” I fix”. When you listened to him and did a technique correctly, he would say, “nice”. He loved to eat Unagi Teishoku and enjoyed fresh mangoes. If you were eating at a restaurant and had a question about a bo kata, he would demonstrate it with chopsticks. You would always see him in a coat and tie and if he was leaving the dojo all dressed up to go out afterwards and you had a question, he would remove his shoes, bow back in the dojo and demonstrate whatever you needed. He was a fun-loving person who loved life and karate. He was a master of kata and kobudo and only asked that you keep his kata “Straight”.

In conclusion, it was truly an honor to study under a true traditional master who exemplified what a true martial arts master is all about. So, whether you teach Okinawa Kenpo Karate or Ryu Kyu Hon Kenpo it is most likely that Odo Sensei had some influence in your training. The legacy of the “World Walker” continues to live in the hearts and souls of so many Okinawan Karateka which can be seen in their kata and kobudo. Domo Arrigato Master Odo. Those of us who have had the opportunity to train under you are forever grateful.


Shinzato Sensei seated at center with author of article,  Jim Moore seated at his left.